A funicular is a train that is designed to run up a steep cliff or hill.  The train can run either on the surface or in a tunnel.

There are three funicular railways in Barcelona Spain.  They are:

The funicular in Barcelona that is of most interest to tourists is the Funicular de Montjuic.  It runs from the Barcelona Metro Station called Paral-lel to Montjuic Park. 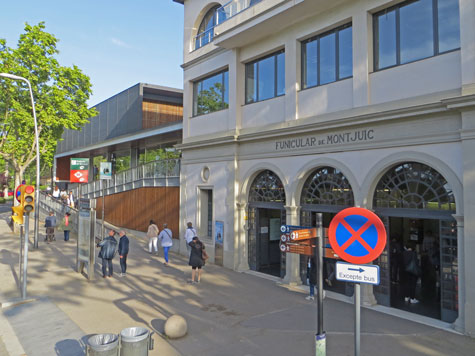 Visitors wishing to explore the many attractions atop Montjuic Hill can catch this funicular and then optionally transfer to the Montjuic Cable Car, a gondola lift.

Alternatively, one can catch bus #150 from the same funicular station.  It runs to Montjuic Castle at the summit of the hill.