Placa d'Espanya is one of Barcelona's great squares.  At its centre, is a fountain that was designed by Josep Maria Jujol, one of Gaudi's many followers.

The two large Venetian Towers (brick campaniles) mark the entrance to Avinguda de la Reina Maria Cristina, the road that leads up to the Magic Fountain.

The Fira de Barcelona (convention centre) is located left of the twin towers.

Barcelona's former bullring is also located on the square.  It was converted into an upscale shopping mall with a spectacular rooftop observation deck. 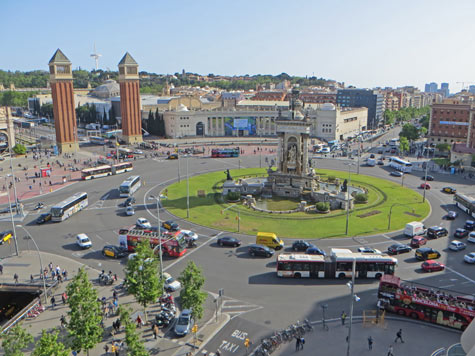 Placa d'Espanya is a major transportation hub in the city.  Many tour buses and city buses pass through its giant traffic circle.

The Placa d'Espanya metro station is also located here.  It in a junction point for 6 metro lines.

The train station at Placa d'Espanya is used for regional RENFE trains.